An academic career teaching French and writing about French literature is an unusual background from which to segue into the literature of gloves. Anne Green, Emeritus Professor of French at King’s College London, shows the value of such a move in her enthralling new book Gloves, An Intimate History. Talking to the glove network she came across gloves being written about by a French author and on following it up found gloves discussed and displayed in a wide variety of ways in French literature an other ares, with a huge growth after 1840.

While many key points in glove history from Tutankhamen’s beautiful linen gloves, through Pliny and Ecclesiastical history to U.K. coronation gloves are covered it is the analysis of how gloves roles in history, and perhaps even today, go far beyond the obvious areas of fashion and utility which is so interesting. Status, authority, honour, legal guarantee although the way to the other end of the spectrum through to duplicity. 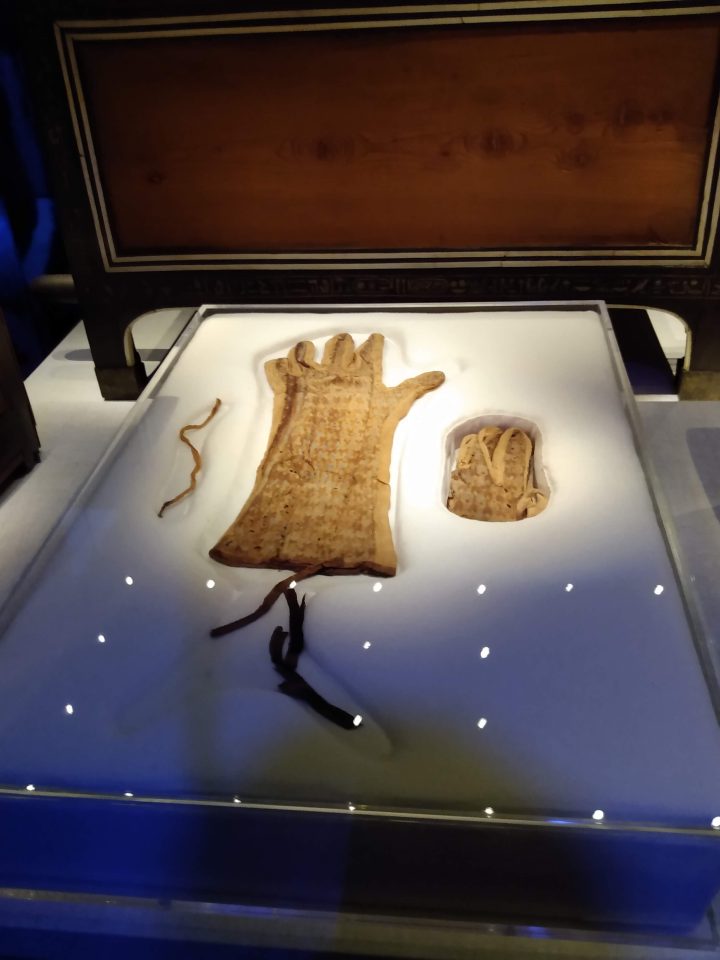 the most famous of the Tutankhamen gloves found in his tomb. I photographed when it was on show in London in late February 2020. Made of linen, embroidered, and similar to a pair his father gave to his chariot driver although these have not been used. Both gloves were found folded as the one on the right, with the left one opened so we can see it.

These carefully researched areas are mostly illustrated through references to literature and given the major importance of France in the glove industry’s past and present Anne Green’s knowledge of French literature opens an entirely new window on the place of gloves in society.

Given the fairly comprehensive detail provided by Valerie Cummings’ Gloves published in 1988 Anne Green’s approach truly  open up an entirely different window on the subject of gloves in a way that is utterly entrancing. As such it is loaded with ideas for modern glove makers to pick up on and initiatives which promoters of gloves around the world could use to support greater glove consumption. It is not all history as she does discuss the implications of the pandemic in terms of the escalation of consumption, the problem of glove waste and indicate how more traditional manufacturers might respond.

The book discusses at length Philip Roth’s use of the glove industry in his 1998 American Pastoral using the glove industry to explain the rise and fall of a family, in a way of a country. The passages quoted bring the industry to life for anyone who knows the glove business or is interested in it. Philip Roth spent a lot of time in Gloversville learning all about gloves, the tanning and how the American industry worked and had developed. I am sure he met with a broad spectrum of people there and in the Museum, which would have been perfect for his research. What I do know is that he found a welcoming adviser on the industry, its history and its detail in John Widdemer. John talked him through the entire history of the business back to well before the start of his own family involvement  via Hilts Willard, which was founded in 1878.

John sadly died in early 2021 and to read the words quoted from Roth again after more than 20 years is to remember many long discussions with him about the US glove industry and how it started to move overseas much earlier than other leather businesses as arguments with the workforce over pay led to strikes. John’s work began as this was well underway and while he watched others struggling, and eventually failing, to survive in Gloversville he travelled with the industry as it moved (often through his personal efforts) around the globe through Spain, Thailand, Japan, Korea, Taiwan, the Philippines and elsewhere before settling somewhat in China, Indonesia, Thailand and India.

John also came from a literary family with his aunt Margaret Widdemer famously winning the Pulitzer Prize for poetry. At their summer house in the lakes north of Gloversville they have a guest bedroom down by the water’s edge which I believe was used largely by her for writing. There is a wooden board on the wall in the room signed by many early twentieth century American writers with whom she was friendly who came to stay. I will always wonder if John put Philip Roth up there so they could continue their conversation into the evening. John always said that apart from putting the glove factory in Newark rather than Gloversville Roth had stayed very close to the reality of the American glove business.

Given her huge knowledge of France it is no surprise that the author talked with Causse Gantier, whose beautiful factory is in the ancient centre of French gloves, Millau. The company was founded in 1892 and built their current factory in the early 21st century. In 2012 they were purchased by Chanel via an organisation that owns many SME’s involved in historic crafts which they want to keep alive. Many are businesses where they feel the continued family ownership was at risk as there are no family members willing to continue. They bought in to ensure the business survives and prospers.  More luxury brands need to do this around the world. Too many countries like the UK have lost skills over the last few decades when they needed support.

For the Roth conversation alone, and Anne Greens’ 21st century analysis of it Gloves, an Intimate History is well worth buying.  A book that is a major contribution to the literature on the way we have covered our hands through human history.

« Leather was first made a million years ago.
Times change »