John Basford was one of my earliest and closest friends when I joined the leather industry. It was always one of my delights to look ahead to the many days of reminiscing over two long, but very diverse, careers in the leather industry with some of John’s excellent wine from the Wine Society, membership of which I gave him in the 1970s.

Sadly after a short illness of 9 months, John passed away on 14th September, 2016 surrounded by his wife and three children. 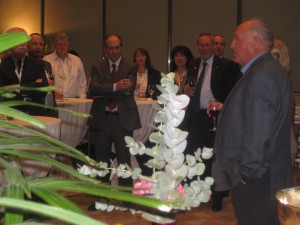 Above is John giving the Toast to the Corium Club at the Hong Kong APLF leather show. Until recently this was an honour given to the oldest member of the Corium Club present. John always found the right words and could relate well to young or old, senior or junior in the tannery.

This is what I said at the funeral:

John Basford was a Northampton lad, born and bred. Not only was he born and brought up here, his first job was here, he studied here, he always lived here and he was a life long supporter of the Saints.

Yet the love and respect for John that we are here to celebrate stretches across the globe. Wherever you travel you will find John has friends and colleagues who relied upon him for help and advice, which he never withheld.

Perhaps it was being so grounded in Northampton that gave him this strength. His father died in action in 1944 so when he was old enough to work and contribute to the household budget he started at British Chrome Tanning. His career there was interrupted by national service, and he choose to enlist for three years with the regular army as it meant he could send more money home to his mum. He was in the Royal Tank Regiment and saw active service in Suez.

After the army he returned to British Chrome Tanning and studied leather part time at what is now the Avenue Campus of the University and was at that time the Northampton Technical College. We saw the daredevil in him when he met up on the leather course with Father Brian Leatherland who is leading the prayers in a few moments. He graduated in 1961 and was awarded the first prize certificate for the year from The Worshipful Company of Leathersellers.

While we tend to think of the movement of manufacturing to Asia as a late twentieth century event it started much earlier in the leather industry. So when BCT came to a stop John had a brief spell with Nene Finishes and Earnshaws before joining the German specialist leather chemicals company Schill and Seilacher. He was to stay with them for well over 40 years, the rest of his career.

I am sure a number of you here today will remember those early days when John was touring his new regions with his colleagues from Germany, excited by what he already knew but even more excited with what he was learning, and the products he had to offer. It was no surprise to see someone so passionate develop into a world leading technician who was welcomed into tanneries all round the world.

And of course not just welcomed, but actually sought after. One of John’s great abilities was being able to communicate simply and clearly with everyone. Be they the most senior or the most junior, the oldest or the youngest or from any continent people felt comfortable to share problems of all kinds with John and seek his advice. And his advice was all the more valuable since he did not mince his words. He told you directly what he thought regardless of whether you might like it or not. Only a true friend does that.

I am also sure there are many here today who look back on moments when John helped them on their career paths, with job opportunities or to meet up with the right people at the University for their interviews.

Back in the seventies at a Paris leather fair we remember when some quite distraught young lads asked for a word. They were a group of government funded Ethiopian students here at Northampton who had run out of money as their government payments had failed to come through. John always watched out for the cohorts of Ethiopian students and ensured they settled in, kept studying and got to see round various UK tanneries. He took this small group aside to be clear about what had happened and was back in a few moments, having sorted out “his boys”. John was determined to pass on his knowledge and experience to many younger students and industry professionals and “his boys” soon spanned the world. He effectively formed a one man international department for the University long before it knew it needed one; and this was something he continued to do well into what should have been retirement.

Everyone of us saw how dedicated he was, how hard he worked and how much he loved leather and the industry. He set high standards for himself and others wherever he was in the world and whatever the working conditions. His drum work often required long hours in difficult conditions but he was always present to supervise the critical additions and checks, explaining in detail how the process worked.

What was wonderful about John was that despite his commitment to leather his interests were actually very wide. He made a great companion with his knowledge of travel and history, his interests in walking and cooking. He regularly reminded me of a time in the early seventies when we were flying back from Germany and decided at the last minute to travel via Paris to take my sister in law, who was living there, to lunch. You could do those sort of impulsive things in those days. Our fading memories made us think we actually failed to connect with her, but we always remembered a memorable day and an outstanding lunch in Paris.

In Northampton over and above his love for the Saints John was for many years the treasurer of the Express  Lifts Amateur Fire Brigade Association. He was also a keen supporter of the Corium Club and the Society of Leather Technologists Chemists who marked his lifetime contribution to the industry in 2015 by awarding him the Axel Landmann Certificate. Amongst many memorable talks and presentations John has given around the world his 2007 Atkins Memorial Lecture on 50 years in the Beamhouse must surely be the most significant. That was the John we shall remember. Not full of nostalgia for the world and industry as it was, although he did prefer rugby when it was amateur, but someone who was proud to be at the leading edge. He deeply enjoyed working with the world’s leading tanners to make the most advanced products using the best equipment.

I am told he used to say to his children, Stephen, Helen and Joy: “love what you do and you will never work a day in your life”. And that was certainly how he lived both in work and non work matters. With Pailing’s wonderful support he was able to adjust past normal retirement and stay in touch with the industry, while still having regular long breaks. Until very recently if you phoned to say you would be in Northampton the reply would come “sorry, just at the airport about to fly to Scotland”

And that is the John Basford we will all remember. Ever active, ever generous, ever philosophical.