The wonderful film of Richard Hodgson and Sons from 1937 that brings back many memories. My father used to buy dressing hides from them for Muirheads in Glasgow having joined them as a finishing chemist in 1934, I imagine they were being produced for Muirheads  at the time this film was made and he met some of the people involved.

As a result of my father’s relationship I worked at Hodgson myself as a Leeds University student in 1966. The course required students to find tannery employment in the vacation and Hodgsons was in Yorkshire and so convenient for the University, A totally new experience and a huge a diverse plant compared to Muirheads in Glasgow, which I did not know that well anyway. My father was a senior manager but very much an employee so I had been in many times but I think I had only had one tour when doing a school project.

Hodgsons and one of the biggest vegetable tan yards in Europe, making sole leather, industrial leathers, and dressing hides for sole leather. It had a new chrome tannery making shoe leather, a gelatine plant, and a chemical factory essentially working on vegetable extracts but increasingly with other chemicals. All this came with a large two stories library and laboratory, and across the road a social club and playing field. Up the road at the end of a short canal from Hull they had warehouses where their own 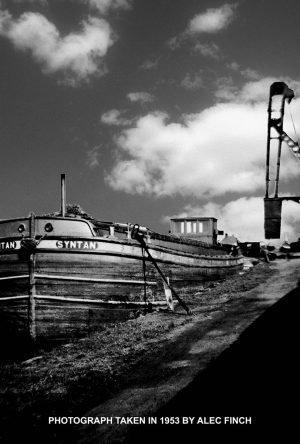 barges which carried hides and bags of vegetable extract up from Hull where their tannery Holme Halls Ltd had a dock on the river where seagoing ships would arrive and be unloaded.
I started work in vegetable tannery with fine staff like Ted Watson, Philip Byrne and Roger Stebbings working for the senior director Morley Wilson, all of whom worked really hard to make me feel at home and make my time useful.
Although the yard hade been updated from 1937 and had a large overhead crane to move the hides and butts from pit to pit it was still very much as per the film except that in black and white it looks darker and more satanic than the large open factory I worked through.
Hodgsons was an enormous factory and the lime yard was bright with the white lime and the many pits. The tan yard was just immense with an enormous crane overhead with which we moved the hides from pit to pit as required.It is easily forgotten how much the UK changed between 1775 and 1820 impacted by the combined effect of the Enclosures, the building of toll roads and the industrial revolution. In that period alone the number of licensed carriages jumped from 18000 to 106000 creating a massive demand for harness and saddle leathers. Hence the Richard Hodgson tannery began in 1812 in Flemingate, industrialising what had been a long history of tanning in the area using local cattle hides and oak bark. As well as equestrian leathers Hodgson soon specialised in leather for the textile industry, used in carding, combing and condensing machinery along with belting leather needed for power transmission systems based on water and wind at first and later for steam driven equipment. These leathers were still being made in 1937 and most were still in production in the 1960s when I started. Belting leathers, hair on butts, strap butts were all being made and some of their dressing hides were still called “Muirheads”. The week or two I spent in the drying sheds working on the Muirheads was special as the smell, colour and beautiful grain of these large hides was absolutely outstanding.

In 1920 Barrow, Hepburn and Gale, just incorporated to merge 2 companies – Samuel Barrow and Brother and Hepburn, Gale and Ross – went public and promptly acquired Richard Hodgson and Sons Ltd. Hodgsons had been selling to Barrow for many years. Although Barrow did have other factories, and was to keep on acquiring, Beverley was where CEO George Odey made his home and it was the base also of his son Dick who became my boss when I left University.

In the heavy leather yard at Hodgson we were given clogs to wear. These had a really thick wooden sole and a hard leather upper. Sturdy socks were required to prevent chaffing, but they did keep you above the water on the floor and were far more healthy than Wellington boots. They were heavy, though, so when I fell into a lime pit it was quite a struggle to get out and rush to the showers before the sulphide did too much harm. The film says everyone fell into a tan pit but we avoided that like the plague as a strong tan liquor is very viscous and in a deep pit it was hard to get out on your own: you sank and someone had to hook you out.

The film is particularly valuable in showing two operations which are largely impossible to see being done today. These are hand fleshing and hand scudding over the beam. Hand fleshing had long been phased out when I started and everything was done by machine. We still did hand scudding but only on leathers that needed a perfectly clean grain. I spent a week hand scudding white alum tanned cricket ball hides and by the end of it fully realised the weight of whole bovine hides. This was back breaking work. Scudding is rarely if ever done these days, even by machine.

Barrow, Hepburn & Gale, the owner of Hodgson’s, established Bevaloid as a separate company in 1956 to manufacture chemicals. In the 1960s Hodgson’s itself diversified into the manufacture of colloids for the rayon industry and in 1964 began the production of leather for shoe uppers and clothing. It continued growing and expanding through acquisition in the late 1960s and early 1970s.

Yet in just a few years the global threats of cheaper labour and synthetic materials had made their marks and Barrow, Hepburn & Gale closed most of its departments in Beverley in 1978, with 750 redundancies, leaving only the chemical works in operation. I remained close to the company and rejoined after University and was technical director of the upper leather side in Hull in the early 1970s followed by a brief period doing the same job in Beverley before moving to Italy, where it looked as though tanning had a more secure future. I remained in close contact with the company and consider them to be a bit unlucky not have saved more tanning in the UK. Hull remains as a wet blue operation to the present in March 2022.

In 1986 the Beverley tanning industry was finally brought to an end with the closure of Melrose Tanners, which had worked the Keldgate tannery formerly belonging to the Cussons family and since 1946 by the Booth Group.