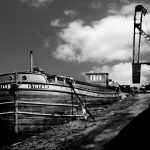 (Update from an item first posted in VegLeatherHubAugust 7, 2015) The wonderful film of Richard Hodgson and Sons from 1937 that brings back many memories. My father used to buy dressing hides from them for Muirheads in Glasgow having joined them as a finishing chemist in 1934, I imagine they were being produced for Muirheads […]